The Smartest Entrepreneur I Know is a Stripper

The Smartest Entrepreneur I Know
is a Stripper

“OK, you see his shoes?” Samantha pointed her chin toward a 40-ish looking white guy whose white button down shirt was too tight. His jeans were tapered and baggy. And he was indeed wearing glossy, black shoes. He was ordering a round for all of his friends who were wearing sneakers. 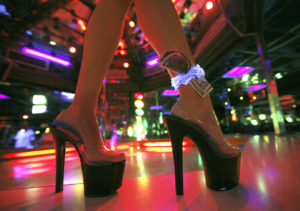 Her dress was tight, short and bright. Her brow was furrowed like Bill Bellicheck calling a play with the Patriots on the 7-yard line, down by 3 points with 12 seconds left on the clock. “This isn’t about sex for him. It’s about showing his friends that he’s running things. That’s $400 if I play it right. Wish me luck. I’m moving in”

She walked over real slow and smiled at the guy standing next to Alpha NiceShoes and asked, “So, are you the guy in charge tonight?”

Alpha let out a loud, incredulous “WHOOAAAA!” which his friends quickly joined.

2 minutes later he handed Samantha the first $40 of the $390 he would ultimately transfer to her that evening.

When Samantha started dancing she quickly grasped that stripping is not really about wriggling, or body type, or even sex. It is about men running from their own vulnerability. It is about easing them into an alter ego where they are alluring and omnipotent.

More than any innovator I’ve ever met, Samantha understands that she is in the business of scratching an emotional itch.

Samantha wound up sitting next to me at my sister in law’s dinner party. My sister had taken a pole-dancing class that Samantha taught and they became friends. I told her I worked in finance. She told me she was a stripper. I asked her the same questions I would ask a startup CEO and her answers were smarter and more authentic than any CEO I’d ever interviewed.

The pure economics of her business are a thing of beauty: predictable cash-flows (less than 5% variability from forecast), high barriers to entry (most women won’t strip), low cyclical sensitivity (when times are tough men need strippers more), low switching costs (like wealth managers, strippers switch clubs all the time and take their ‘regulars’ with them).

The ingenuity of her particular craft makes her a brilliant entrepreneur. Here are a few morsels of business brain candy:

A stripper is a role-playing therapist. Once you hone in on the unmet emotional need your job is to act as if you can fix it.

Women-run strip clubs have the same problems that most co-ops have. They’re run for the benefit of the workers to such an extent that they sacrifice customer service. It’s a more pleasant environment to work in, but it gravitates toward the dancers’ needs not the customers’.

The most important thing, believe it or not, is empathy. If you get a guy to open up before a lap dance begins. He’ll come back again and again. This is my biggest differentiator from other dancers.

What I loved about Samantha is that she is counterintuitively innovative. We’ve been trained to look for innovation from self-driving cars, wearables and artificial intelligence. We ignore the less sexy, dark corners of entrepreneurship. The Samanthas of the world are serving you street meat from a Halal food cart. They are plumbers. They pause their dominos game to sell you beer at the Bodega.

And long after you’ve ditched your MySpace account, you find yourself unable to cope without them.