Innovate. Even If It Gets You Fired

Innovate.
Even If It Gets You Fired

The following is an edited excerpt from my new book, This Might Get Me Fired: A Manual for Thriving in the Corporate Entrepreneurial Underground .

In December 2012, I recognized that I needed to leave my job at Bloomberg 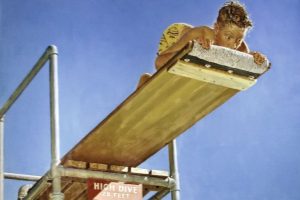 I felt stagnant, despondent, and unfulfilled. Yet I stayed there for another eighteen months because I was terrified that a wall of Horrible Outcomes would crash upon me if I left.

I was afraid to leave without a new job waiting for me. I was afraid to give up my benefits. I was worried that I would look bad for quitting. I was terrified that my savings were inadequate. And each negotiation to work with a startup fell apart when we started to talk about money and equity. I was worried that I would never make enough money again.

This career doomsday scenario was foremost on my mind as I took the E train to Manhattan to hand in my resignation on a freezing January morning in 2014. I arranged a meeting with my director and nervously recited my lines.

“Julie,” I said when we met, “there are people who love it here and do great work here. And I’m proud to have worked with them — but I am not one of them. It’s time for me to move on. So I am handing in my notice.”

She did not leap out of her seat, scream at me, and threaten to sue me. She smiled, thanked me for all that I had done, and gave me a huge hug. She then called HR and asked them to extend my benefits for a month.

This was the first indication that the fears that had kept me chained to a job I hated were false. Soon, all of the other fears were discredited, too.

When I told people that I had quit my job without finding another new job, they responded with admiration rather than condemnation. The night after I quit, I was asked to introduce myself to a large crowd at a networking event. “I’m Greg Larkin, and today I quit my job in Bloomberg’s Innovation Team.” The crowd erupted in applause.

When I finally landed my first consulting engagement with Viacom, they offered me twice as much money as I had ever made in a month. My next client doubled Viacom’s offer. Within a year, I was not financially destitute — I was making more money than ever before.

When I finally started directly consulting senior executives in these companies, I was bold and candid about what needed to change. And they didn’t scream at me and throw me out of their offices. They were thrilled to hear the fresh, honest perspective of someone who had been through it before and was more committed to authenticity than ego-coddling.

I share this not to aggrandize my career. There are still moments of scary, intense pressure. But fixing it is entirely my responsibility. That ownership is empowering and motivating.

All of the fears that kept me from making a critical change turned out to be small and manageable. And as I work with intrapreneurs, I see how pervasive this inflated misperception of risk is. It prevents great innovators from doing their most courageous work.

Courage, ultimately, is the greatest distinguishing factor of effective intrapreneurship.

Behind every bold new product launched from a big company – where a market is transformed, or a new generation of leaders is given a voice – someone had the courage to step forward and say “I recognize that this is going to be hard. That powerful, entrenched interests are going to try to stop me. And I’m doing it anyway. Even if it gets me fired.”

This is the single most unheralded act of bravery in the entrepreneurial world. When a startup founder demonstrates that level of vision and audacity we know their names. They are Steve Jobs and Elon Musk.

When an intrapreneur makes that stand we see the ribbon cutting ceremony, or the jump in stock valuation, but rarely do we know the actual intrapreneur. My hope is that this book changes that. I hope that every new product built in every large company has an explicit goal to change the organization that incubated it, rather than an unstated prayer that intransigence doesn’t win.

Because every person I’ve ever known who made that stand looks back on it as the most important and valuable turning point of their life. Even if they got fired afterwards.

Be courageous. Even though it might get you fired.

For more advice on how to innovate in a corporate environment, check out my book, This Might Get Me Fired.